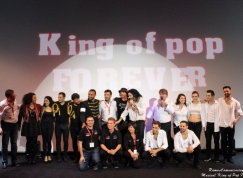 
The last show of the Michael Jackson tribute took place on November 8, 2015.

The last show of the glorious tribute to Michael Jackson, King of Pop Forever, took place last Sunday. To say it was an enormous success would be an understatement.

The audience were able to enjoy the show's magnificent voices, professional dancers, and the twin himself, Francisco Jackson.

Following the last show, Go Events2 announced a world tour to take the tribute to other cities.