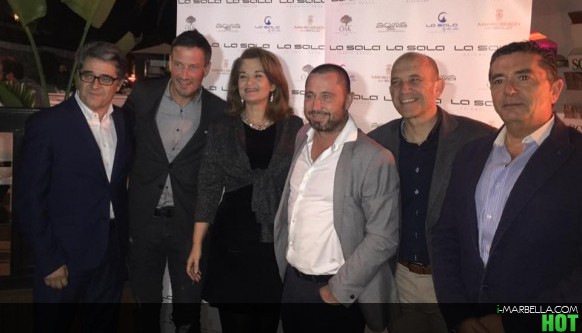 To relaunch the new look, La Sala Banus held two amazing VIP parties on the 5th and 7th December, with the attendance of the best referee of the world, Mark Clattenburg, as well as the members of Marbella Town Hall, such as Javier Porcuna and Manuel Osorio to name a few. Besides La Sala’s signature canapés and drinks, the guests enjoyed excellent live entertainment by the Masquerade Duo, Jackie Brown Band, Menzillon Drum Duo as well as the famed Planeta 80 from Cordoba.

Mark Clattenburg is an English professional football referee, who officiates primarily in the Premier League, and for FIFA

Four teams of builders were working 24/7 to bring you an even better ultimate social and dining experience. Besides brand new areas and a new look, La Sala will also present fresh entertainment acts. The menu are also featured brand new dishes and exciting new cocktails and drinks.

La Sala Restaurant has truly become, ‘The ultimate social and dining experience,’ and is renowned as one of the busiest restaurants in Andalucía, an accolade successfully retained all year round not only during the traditional summer season. In recent years La Sala has welcomed endless number of celebrities such as Prince Albert of Monaco, Sir Alan Sugar, Eva Longoria, Jamie Oliver, Ronan Keating, Tulisa, Kym Marsh, Ne-Yo, Tinie Tempah, Jason Derulo, Little Mix, and many more.

For reservations at La Sala Puerto Banus, call on +34 952 814 145 or email at reservations@lasalabanus.com