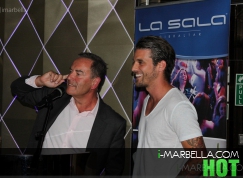 
The growth of the La Sala brand continues with the announcement of the opening of La Sala Gibraltar.

Afer opening successfully in the UK, the famous leisure brand La Sala is taking a step further with the announcement of the opening of the frst La Sala in Gibraltar.

The legendary restaurant will be situated on the magnifcent five-star luxury yacht hotel Sunborn, moored in an idyllic marina on Western Europe's southernmost tip. The 142-metre yacht hotel comprises 189 lavishly appointed rooms together with banqueting suites, bars, cocktail lounge, tranquil pool, spa, and sundeck and soon it will also be offering its guests the unique opportunity to enjoy the ultimate social and dining experience.

"This is really exciting news for both Gibraltar and for the brand. La Sala is so much more than a restaurant, it's a lifestyle! And now we are bringing this unique concept to Ocean Village, offering the ultimate social and dining experience onboard the five star Sunborn yacht hotel," Ian Radford commented.

La Sala Restaurant in Puerto Banus is renowned as one of the busiest restaurants in Andalusía, an accolade successfully retained all year round, not only during the traditional summer season. Its unparalleled formula has attracted a mass of international media and confrmed its position as Puerto Banus' premium hotspot thus welcoming celebrity fgures and playing host to an array of television shows and documentaries broadcasted worldwide.

For more information, you can sign up on www.lasalagibraltar.com to receive exclusive news and offers from La Sala Gibraltar.