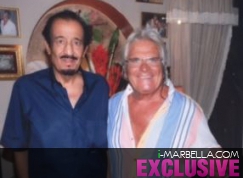 The Saudi Prince, Salman Bin Abdulaziz Al-Saud, who is brother to the late King Fahd, has visited Villa Tibero during his stay in Marbella.

Salman Bin Abdulaziz Al-Saud is the King of Saudi Arabia. He is a promiment figure not only in terms of politics, but also in relation to the issues of urban heritage. In 2013, Salman received the Lifetime Achievement Award of Al-Turath Charity Foundation in the field of urban heritage.

The Saudi Royal Family, who are frequent visitors to the Costa del Sol, have been spending holidays in Marbella for the past 30 years. Their yacht, Shaf, can be seen in Puerto Banús.

The Saudi royal family’s connection to Marbella dates back to the time when Prince Fahd, who ruled Saudi Arabia between 1982 and 2005, decided to vacation there, later building a number of luxury properties.

King Salman, not a stranger to Marbella, is often called 'amigo Salman' in these parts of Spain.

Imagine a Mediterranean palazzo surrounded by lush vegetation, a menu with such a wide choice it suits all plates, a cellar that brings a sparkle to every wine lover's eyes. That's Villa Tiberio, the 18-year-old restaurant known for its high standards and faultless service, where its owner, Sandro Morelli, looks after clients as if they were guests at his own home.

Opened in 1989, Villa Tiberio's location, just a whisker away from The Marbella Club Hotel, is ideal. Surrounded by tall trees, the villa set in sumptuous grounds could never be overlooked or dominated by high-rise buildings. Symbolising the best of Italian and Mediterranean hospitality, Villa Tiberio has an added extra. The unique Morelli touch, which guarantees dining in the coast's most beautiful gardens will be the highlight of any trip to Marbella.

Marcos Garcia, Local Police Painting Portraits for the Monarchs of Morocco and Saudi