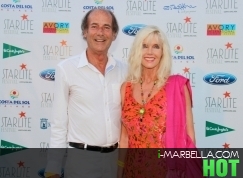 The Costa del Sol welcomed the Starlite Festival this weekend and the first concert that was George Benson was sold out!

Starlite Festival began with the concert of George Benson. Three thousand people filled the auditorium for two hours enjoying a musical performance by the great living legend of jazz. George gave a tour of his entire career with known numbers such as "Kisses in the Moonlight," "On Broadway", "Nothings Gonna Change my Love for You" or "Give me the Night" that made the crowd sing and dance!

The party continued after the concert at the Starlite Lounge with guests like Carmen Lomana, Estefania Luik, Arancha de Benito, Luis del Olmo, Pepe Navarro, Manolo Santana, Nuria March, Beatrice d'Orléans, Gunila von Bismarck with Luis Ortiz to name a few. Starlite Festival is the first food and sound festival that promises to be the essential event of the summer.