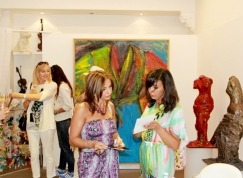 On May 7, the pavement outside new art venue Gallery Pieters thronged with an international crowd of art aficianados who had come to see the first exhibition of what promises to be a stylish addition to southern Spain's growing reputation as a centre of culture. Gallery Pieters may not be a pop-up Pompidou, but it is exhibiting artists that the Pompidou Málaga would be very happy to show.

You'll find Gallery Pieters in the Cristamar Centre, only a few steps from the east end of El Corte Inglés. The opening show – Jim Dine – Unique Pieces features work by the artist Jim Dine, a leading artist of the American pop art movement. Dine is a contemporary of pop art's other groundbreaking artists, Andy Warhol, Roy Lichtenstein, and Claes Oldenburg, and in the early 1960s Dine became famous for his oil paintings, prints and sculptures based on items from everyday life.

It is said that one Jim Dine piece called Hair was the inspiration for the 70s musical of the same name. His most recent work uses imagery borrowed from ancient Greek, Egyptian, and African objects and he is famed for his Pinocchio sculptures and his interpretation of the Venus de Milo.

Gallery Pieters has three of Dine's Venus de Milo sculptures in this exhibition. There are seven pieces of Dine's work in this show and it is called Unique Pieces because it is the first time they've been exhibited in Spain. All the pieces are available for sale and prices start at 80,000€ and go up to 250,000€. In total, the works are valued in excess of one million euros.

The work on show dates from 1984 and in terms of a thematic content, Dine draws heavily on Abstract Expressionism – a movement associated with art world big names Jackson Pollock, Mark Rothko, and Willem de Kooning, plus collage and assemblage techniques associated with Dada movement.

Gallery Pieters has three successful galleries in Belgium: two in Knokkeheist and one in Ghent. It now hopes to encourage art fans in the Marbella area to visit the gallery and be introduced to original works by world-class artists. Right now, it wants people to know that Gallery Pieters is in Puerto Banús and that it's doors are open to everyone with an interest in contemporary and modern art and sculpture.

The current Jim Dine show will be flowed by the following exhibitions:

Segui is an Argentinian artist, who is considered a master of painting and printmaking. His humorous and satirical works have been shown throughout the Americas and Europe, and he has received numerous awards.

Niki de Saint Phalle (1930-2002) was a French sculptor, painter and film maker. Her large and colourful sculptures feature in many public places around the world from Paris to California. Her Tarot Garden project in Tuscany, is acknowledged as being influenced by Gaudi’s Parc Güell in Barcelona.

Arman is a French artist specialising in the creation of art works from common objects. He's known for stripping down objects to make them 'useless', so that you are forced to see the object's aesthetic value, rather than focus on its function. Arman has been in the Top 15 of the world's Top 100 artists for the last eight years and has had more than 30 one-man shows all over the world.