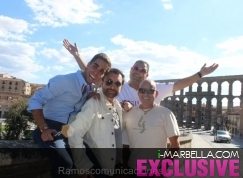 
Felix Ramos traveled to Madrid to record an interview with the businessman and singer Frank Camelot.

They started off having a lovely dinner at Andrea Tumbarello's restaurant called Don Giovanni, where they also met with the former tennis player Emilio Sanchez Vicario and the Tv contributor Count Lequio. On Saturday at noon they enjoyed a lunch at the iconic restaurant "The Fuencisla" in the Móstoles area where they got to meet Jose Manuel Parada. Together they went to see Beatriz Trapp at a wedding fair in Móstoles. Saturday night they attended the opening of an Italian restaurant called "Napoli" in the area of Callao, where Felix interviewed the actor Eduardo Casanova.

On Sunday morning, Frank Camelot went to Villaviciosa Paddle Club to play a game of paddle tennis with some friends from Madrid. After that they had a half day trip to Segovia's most emblematic restaurant named "Jose Maria", accompanied by the Deputy Mayor Andres Torquemada and tv presenter J.Manuel Parada. Then later on they returned to Madrid to see the game of Real Madrid-Getafe and the last dinner was held in the Restaurant Candela de Villaviciosa.