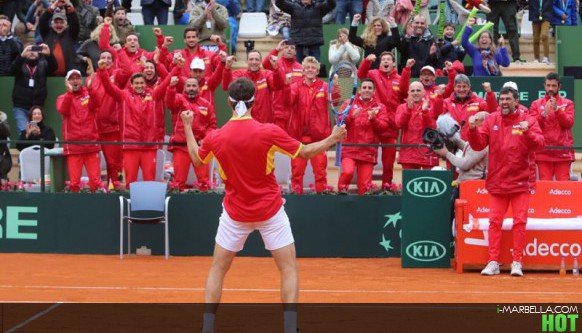 
Manolo Santana, Spanish tennis legend and one of the key participants that made possible for the Davis Cup round between Spain and Great Britain to be held in Marbella, was honoured this Saturday 3rd of February of 2018 at the central track of the Puente Romano Tennis Club that bears his name before the tournament started.

This ceremony was also attended by José Ramón Lete, president of the Consejo Superior de Deportes and took place just minutes before the start of the doubles match between Jamie Murray and Dominic Inglot against Pablo Carreño and Feliciano López the first match of the tournament in Marbella.

The results of the first round of the Copa Davis this weekend are as follow:

Albert Ramos gave the final point for the national team of Spain to move forward on the Davis Cup.

This time, to access the rooms of the World Group, where from April 6 to 8, the German league with the brothers Mischa and Alexander Zverev waits for the Spanish selection.

Ramos, the personal favourite of the new captain Sergi Bruguera, was able to obtain the victory on his favour despite the ups and downs during the game by taking advantage at the key moment that took place during the outcome of the third set.

This way the Spanish selection manages to move forward on the board of participants leaving the stakes this way:

The eliminatory against Germany is expected to be tough, especially with Alexander Zverev, the 5th of the world as the head of their team. But, with good strategy and spirit, the Spanish team is ready to open its way directly to the podium this year.

Make sure to follow us to stay updated with the development of the tournament:

This Marbella tennis club is the official headquarters of renowned tennis tournaments held in Spain, such as the ATP, WTA, and world-famous Davies Cup. Among its facilities, it includes a gym, activity room, massage room, sauna and Turkish bath.