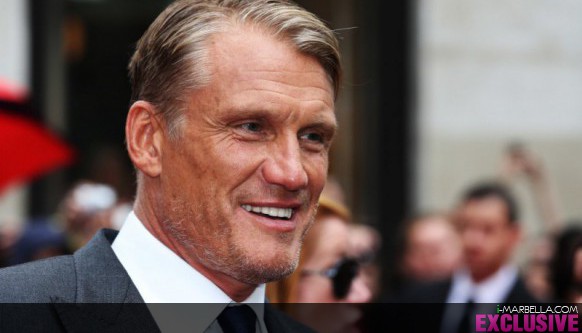 Dolph Lundgren and Grace Jones
While in Sydney, he became a bodyguard for Jamaican singer Grace Jones and began a relationship with her. He received a Fullbright scholarship to MIT and moved to Boston. Jones convinced him to leave University and move to New York City to be with her and begin acting, where, after a short stint as a model and bouncer at the Manhattan nightclub The Limelight, Jones got him a small debut role as a KGB henchman in the James Bond film A View to a Kill.

In 1994, he married Anette Qviberg, a jewelry designer and fashion stylist in Marbella. The couple decided they liked Marbella so much that they rented accommodation there for years, before eventually buying a family home there.

They have two daughters: Ida Sigrid Lundgren and Greta Eveline Lundgren, both born in Stockholm. Lundgren and Qviberg have cited the reason for living away from Hollywood is that they want to give their children as normal a childhood as possible.

Dolph Lundgren and Anette Qviberg with their daughters

In early May 2009, Lundgren's Marbella home was reportedly broken into by three masked burglars who tied up and threatened his wife, but fled when they found a family photo and realized that the house was owned by Lundgren. Lundgren later stated he believed the intruders to be from Eastern Europe and had contacts in Bulgaria investigating them, but to no avail. After the incident, Lundgren's elder daughter, Ida, suffered from post-traumatic stress disorder. His wife was the "most traumatized",and as of 2011, they are divorced.

We cannot wait for the The Expendables 4 and Tour de Pharmacy that is currently filmed to be relised in the 2017! Dolph keep filming!

The movie star Dolph Lundgren is in Marbella this week! (3)