Do You Love Motown? 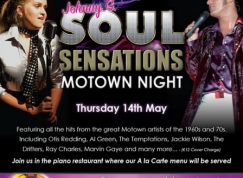 Do you love Motown? Book for the Soul Sensations Motown Night Thursday, May 14!

Do You Love Motown?