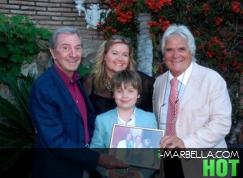 Des O’Connor has been enjoying Marbella with his family. The star visited Villa Tiberio restaurant and its owner Sandro Morelli, along with his wife Jody and son Adam to plan the upcoming charity event that takes place on the 8th of June.

The English comedian and singer Desmond Bernard O'Connor is also a former chat show host. He was the presenter of the long-running Channel 4 gameshow Countdown for two years. He has also recorded 36 albums and has had four top-ten singles, including a number-one hit with "I Pretend", with global sales of more than ten million records.

Des O’Connor had a meeting with the Sandro Morelli, who is the owner of Villa Tiberio, to discuss details for the upcoming Special Summer Party in aid of Children with Cancer UK, who work closely in conjunction with London’s Great Ormond Street hospital.

The event will take place Sunday June 8 from 7pm, promises to be a superb night and will definitely be the charity event of the summer. Guests will include of course the host and comedian Des O’Connor and also Marbella mayor Angeles Munoz. Neil Roberts, of Holby City and Beverly Hills 90210 fame, will be the MC for the evening.

Furthermore, Mitch Winehouse, Amy Winehouse’s father, will be performing at the event with his Jazz band, and there will also be special performances from West End stars Julie Atherton and Charlotte Wakefield. Local girl Zoe Louise will also be entertaining the guests.

There will also be an e-auction on the night, with amazing prizes including tickets to London theatre shows, a signed England shirt, a signed football donated by the Arsenal football team, a week stay at Puento Romano Hotel and many more!

Imagine a Mediterranean palazzo surrounded by lush vegetation, a menu with such a wide choice it suits all palates, a cellar that brings a sparkle to wine lovers' eyes. That's Villa Tiberio, the 18-year old restaurant known for its high standards and faultless service, where owner Sandro Morelli looks after clients as if they are guests in his own home.

Opened in 1989, Villa Tiberio's location, just a whisker away from The Marbella Club Hotel, is ideal. Surrounded by tall trees, the villa set in sumptuous grounds could never be overlooked or dominated by high-rise buildings. Symbolising the best of Italian and Mediterranean hospitality, Villa Tiberio has an added extra. The unique Morelli touch, which guarantees dining in the coast's most beautiful gardens will be the highlight of any trip to Marbella. And we are told our food is superb!

For more information about Children with Cancer UK visit their website: www.childrenwithcancer.org.uk