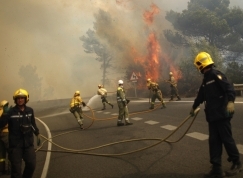 
The first fatality caused by the fire came to light when the burnt body of a 78 year old man was found close to one of the fire's hot spots close to Marbella.

It’s now known that the 78 year old British man who died had been evacuated from his house in Las Blanquillas in Ojén, near Marbella. But for some reason he decided to return home and then was trapped and the fire services found his burnt body yesterday in a shed containing farm implements. His wife is the only person unaccounted for after the blaze, and it is possible that he may have returned to the house to look for her.

Also a German couple in their 60’s have been seriously hurt. Marbella town hall says they were surprised by the flames and now have burns 40-50% of their bodies. Those affected by the blaze are being first treated in the Costa del Sol Hospital in Marbella, and then many suffering burns are being transferred to Málaga to the Specialist Burns Unit in the Carlos Haya Hospital.