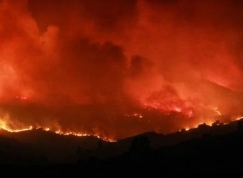 
Fire-fighting planes started work again at first light this morning (Saturday) to dampen down the flames, but the fire is generally extinguished.

Coín, Monda, Ojén, Alhaurín, Mijas and Marbella are all affected by the blaze which is thought to have been started deliberately. Some 5,000 people have been evacuated, including 90% of Ojén, and ten urbanisations in Marbella.  The AP-7 was closed for a time.

The Junta delegate in Málaga, José Luis Ruiz Espejo, has said today that he suspects the fire could have been started deliberately given its rapid propagation. He said the technicians suspected the fire was man made from the start.

At first light this morning the 17 fire-fighting planes returned to the air. Five planes which drop earth, four large capacity helicopters, five transport helicopters, two amphibian planes, and a plane for coordination and vigilance. More than 250 professionals from fire fighting organisation INFOCA are working this morning in Mijas, Marbella, Alhauin de la Torre and in Coín where the fire started.


The Mayor of Marbella, Ángeles Muñoz, has confirmed that several urbanisations have been evacuated, including La Mairena, Elviria, the area of Las Chapas and Molinillo where the fire is concentrated and continues to advance. Between 25 and 30 families have been evacuated from Alpujata on the outskirts of Monda.


The fire broke out on Thursday afternoon and has affected Coín where some 60 homes have had to be evacuated. The fire was still burning overnight as so the terrestrial fire fighters continued to work over night, according to the fire fighting Infoca.
The extinction of the blaze is being complicated by the strong hot wind known locally as the ‘Terral’.

The fire continues out of control and the Mijas Town Hall has told the residents of la Atalaya to urgently leave their homes. A level 1 has been put in place and that indicates that the prevision for the fire could affect non-forestry assets.