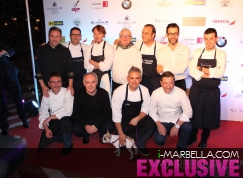 Daní Garcia will be accompanied by Pascal Barbot, Grant Achatz, and Thomas Bühner, who will cook together for this culinary event.

With Michelin starred excellence from France, Germany, and the United States, it will be a gastronomic event of international prominence, held over three nights.

This year, A Cuatro Manos begins with the revival of elBulli's signature dishes. All the participating chefs will present their own interpretations of recipes from chef Ferran Afría.

The Revival of elBulli, 7th March

Dani García Restaurante at Puente Romano Beach Resort is the venue of choice to acknowledge Ferran Adrià, one of the main figures that has defined the kitchen and cuisine of Dani García. Nine of the chefs will revive and recognise what elBulli signifies within the world of gastronomy.

A Fusion of International Cuisine

Led by Dani Garcia this gastronomic event will exceed all expectations, with creative cuisine unlike any other. Dani García is a chef who, through inventive techniques and ingredients, uses his world travels to inspire him.