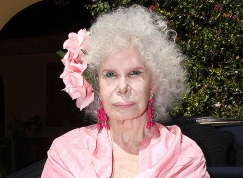 Maria del Rosario Fitz-James Stuart, the eccentric Duchess of Alba, the Spanish aristocrat, and one of the richest women in the world was undoubtedly adored by the Spanish people.

She met such movies stars as Marilyn Monroe, was married three times, widowed twice, and even took part in a bullfight!

Earlier we reported that on Sunday evening she was admitted to Sagrado Corazon hospital in Sevilla with pneumonia.

She was said to be in a serious but not critical condition. Later, she was taken home to her six children and her husband Alfonso Díez, 25 years her junior.

Spanish Duchess of Alba had more titles than any other noble in the world, holding a world records for having 57 titles.

The Duchess of Alba was last widely discussed in 2011 when she danced at her wedding to Alfonso Diez.

Billionaire Spanish Duchess of Alba, 85, gives away fortune to marry

The Duchess of Alba prepares for her wedding on Wednesday