Airport In Estonia Comes Up with the Coolest Idea Ever: Click to See 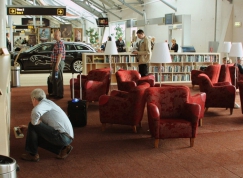 
Following our article about Europe's Best Airports 2014 and taking into consideration the fact that we, i-Marbella team, mostly come from Estonia, we just had to share the news!

If you find yourself in the airport in Tallinn, Estonia, you are in luck. Reacting to the lack of an airport bookstore, the good people at Tallinn Airport decided to supply something better: an airport library.

The whole thing operates off an honour system; there are no due dates, not even a librarian. If a patron wants to keep a book, the airport just asks that they supply a different one. And if their initial call for books is any indication, that should not be a problem. The airport was flooded with more donations than they ever expected, including some by the country's president and first lady.

But best of all, each book includes a bookmark asking readers to note down where the book is going. Which means that before long, the airport library will hopefully be full of globetrotting books that have visited all different corners of the planet. I am already thinking about the combinations: The Bluest Eye in India, The Great Gatsby in China, Huckleberry Finn in South Africa – the possibilities are endless. Though, I suppose great works of American literature might not be the most common on the shelves; info from the airport states, however, that most of the books are written in either Estonian, Russian, or English, so who knows? The point is that in a world that seems to increasingly think that paper and ink books are dying out, here we have a whole library of books that are traveling across the world. Jetset to Estonia, anyone?