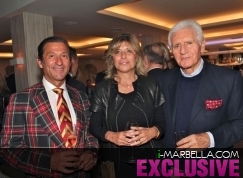 
All Sports Country Team Cocktail Dinner at Sea Grill at Hotel Puente Romano took place on the 24th of May.

A.S.Co.T. Club was founded at the end of 1991 as an association of friends.

Manuel Baldauff, Constance Ridley, Kristina Ridley, Conde Rudi von Schönburg, Conde du Bediesse, Florian von Restorff
It was by playing tennis every Thursday evening that the A.S.Co.T. Club
Founders reinforced their friendship. Conscious of the contribution that tennis and sport had brought them in their lives, and of the international nature of the group, with members from Germany, Austria, France, and Hungary, they decided to widen the concept. Thus, in a “Biergarten” of the fashionable Grossflottbek neighbourhood in Hamburg was formed the idea of creating a tournament of teams from different countries. The vocation given to A.S.Co.T. Club was to become a truly international club based on sporting activities, with the organisation of a tennis tournament each year.

As a result of their origins, education or professional life, nearly all of the members can interchangeably carry on a conversation in English, German, French, Spanish or Italian. Even though it has been tennis that has historically linked the six founders who launched the concept of A.S.Co.T. Club, the door remains open to other activities, hence the significance of the acronym:

Also known as “Cardinals” because they wear the A.S.Co.T. Club badges with the red background on their blazers, the initial members are participants for life, and number six.

One becomes a member of A.S.Co.T. Club by participating in its friendly tournaments.

In the spirit and tradition of the musketeers, the motto of A.S.Co.T. Club is:
“Unus pro omnibus et omnes pro uno,
semper fidelis ad causam ascotiam”

More about ASCoT in general on www.ascot-club.eu