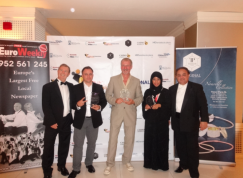 Filmmakers from across the globe, together with guest celebrities and dignitaries, were treated to an evening of pleasure and excitement and to a live performance by the legendary Chico Castillo.

Justin Hunt, accompanied by his father Glen, brought tears to the eyes of the audience by making an emotional speech while collecting the award for Best Documentary “The Speed of Orange” from USA. This is the second time that this talented filmmaker has collected the award for best documentary when his film “Absent” won in 2010.

The award for Best Feature Film went to “I’m Dating You Not” from Spain which beat the runner up “A Soft Scent of Cinnamon” by the smallest of the margins, followed by “Sardonic Smile” from Germany.

The other runners up were:

It was a pleasure to see all the filmmakers having a great time in Marbella and we thank them for their support and enthusiasm. Our thanks also goes out to our sponsors, promoters and the MIFF team and we look forward to an exciting and successful 9th Marbella International Film Festival in 2014.