A False Bomb threat in Marbella caused panic during midday May 11, 2018 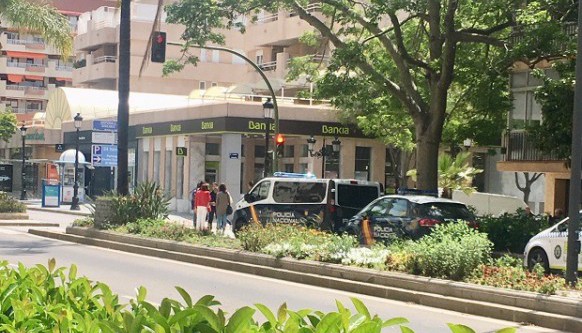 Marbella citizens faced chaos for two hours due to a false bomb alarm on Thursday, May 10, 2018 Source: www.marbelladirecto.com


On Thursday, May 10, 2018. The National and Local Police cut off traffic for two hours around at a Bankia bank located in the Ricardo Soriano Avenue. The bank employees stated that after receiving an anonymous message at 11 am in which a voice alerted them to a suspicious device during the rush hours leading them to contact the police immediately.

What seemed to be a bomb threat in a branch of Bankia Ricardo Soriano Avenue turned out to be false alarm yesterday creating chaos for two hours in Marbella.

Around at 11.30 am, employees of the bank branch ''Bankia'' received an anonymous call in which apparently a voice recorded message warned out about the presence of a suspicious device. Quickly, the managers of the bank alerted the employees and clients about the overwhelming situation who were at that moment inside.

A few minutes later, after receiving the warning from the bank the National Police and Local Police set in motion a security protocol for these special cases and blocked off the area using tapes and vehicles, alerting and driving away people who were nearby the bank, which was immediately closed following the security protocol. The police also prevented the neighbors of the buildings in the area that remained watching the shocking event due to their safety.

The traffic in Ricardo Soriano was then cut off in both directions, from the western end, at El Pirulí, to the middle of the avenue. Traffic was also affected around Marbella city center, preventing all people around the Ricardo Soriano Avenue, The public transportation such as buses had to modify their service routes.

A situation like this could be constitutive of crime. According to the Article 561 of the CP establishes "who falsely claims or simulates a situation of danger to the community or the production of a loss as a result of which it is necessary to provide assistance to another, and thereby cause the mobilization of police services, assistance or salvage, will be punished with the prison sentence of three months and one day to a year or a fine of three to eighteen months. "

After the inspection work, the Tedax (Technician Specialist in Deactivation of Explosive Artifacts) specialists found that it was a false alarm so around 13.30, they lifted the police security lines and restored the traffic of vehicles and pedestrians.

''I'd like to congratulate all the security forces for their promptness in applying the pertinent protocol in Ricardo Soriano Avenue this morning.’’ Mayoress Angeles Muñoz posted on her Facebook thanking the police guards for their good job

The news went viral in social media where there were people mentioned a suspected robbery with hostages or a bomb threat, due to the lack of official information.