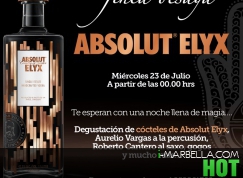 Three Summer Events that you don’t want to miss are presented by Absolut Elyx in the beautiful Finca Besaya: July 23rd, July 29th and August 21st.

Finca Besaya & Absolut Elyx invite you to the summer cocktail parties you have been waiting for and the first event takes place on 23rd of July. And the other two on July 29th and August 21st.

There will be Absolut Elyx cocktail degustation, live music by Aurelio Vargas (percussion), Roberto Cantero (saxophone), beautiful gogo dancers and much more. It will be a night of magic..

Under the scrutiny of its master distiller, ABSOLUT has been patiently perfecting a new luxury vodka. Now it’s ready, and it’s called ABSOLUT ELYX. Crafted from single estate wheat and manually distilled in an authentic 1921 copper still, ABSOLUT ELYX is defined by its exceptional purity and silky texture. It’s the finest expression of ABSOLUT, and is available in the US from April 2013.

“The past few years have seen a wave of super premium vodkas that have been mostly about image,” says Mathias Westphal, Global Brand Director. “ABSOLUT ELYX is something different. It’s a unique combination of traditional handcraft, copper distillation and cutting-edge design.

ABSOLUT ELYX is the result of manual processes, authentic craftsmanship and human supervision through every detail of production. “Only a few people have the skills and knowledge to operate our old copper still. Every handle, knob and lever is adjusted manually. Creating a vodka this way is very time-consuming, but when you taste ABSOLUT ELYX you know it’s worth the effort,” explains Krister Asplund, Master Distiller.

ABSOLUT ELYX is made in Åhus, Sweden, exclusively from single estate wheat from the Råbelöf Castle and water from the pristine well upon which the copper distillery rests. From seed to bottle, everything is done within a fifteen-mile radius of the distillery, ensuring quality control and perfection in every detail.

ABSOLUT ELYX is manually distilled in a 1921 still with columns, pumps and pipes made of solid copper. These types of stills are not built any longer. The copper naturally catalyzes trace compounds in the spirit, purifying the vodka and adding a highly prized texture and taste.

The single estate wheat, the manual operation and the old copper still are three equally important elements contributing to the taste and texture. ABSOLUT ELYX is clear and bright, with a purity and silky texture. It has an elegant, well-rounded aroma, a silky mouthfeel, luxuriously soft taste, and a silky, clean finish. ABSOLUT ELYX is perfect to serve neat, or in martinis and simple cocktails where the luxurious taste and silky feel can be savored.

“ABSOLUT ELYX was created for those who value integrity, and can discern genuine quality,” says Mathias Westphal. “A perfect blend of substance and style, it’s the finest expression of the expertise, creativity and passion that define ABSOLUT.”

ABSOLUT ELYX is available in Spain from June 2013.

In Marbella, you can find the bottle in Finca Besaya and Trocadero Marbella and Sotogrande, as well as in the liquor stores Casa Pablo and Casa Santi.