23 Anniversary of FM Consulting in Marbella 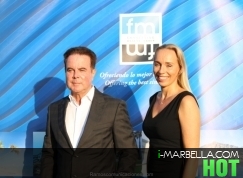 
To mark the 23 anniversary of the company FM Consulting there was the honourable Consul of Latvia Fausto Martínez to present a new tourist and holiday paradise in 'Cup Cana', Dominican Republic. The anniversary took place in the resort grounds of "Cortijo del Mar" and it was also attended by the Mayor of Estepona and members of the Consular Corps of Malaga.