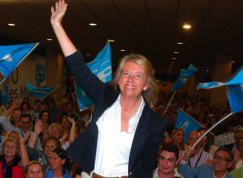 The Partido Popular, or Popular Party have retained their popularity in the city as Marbella’s Mayor Mª Angeles Muñoz retains her absolute majority in the 22 May local elections.

With local and regional elections taking place throughout Spain, 52 per cent of the overall vote went to the Partido Popular on a day which is being seen as a key to the mood of the forthcoming general elections and the general dissatisfaction with the current socialist government headed up by the PSOE’s Jose Luis Rodriguez Zapatero.  Despite the growing signs that Spain is ready for a change, Zapatero remains steadfast on the date of the General Election, and aims to hold out against growing pressure to bring the election forward.

Locally, the Partido Popular retain their absolute majority, giving Mª Angeles Muñoz another 4 year window of opportunity to get Marbella back on track following the previous administration’s corruption scandals and the consequent public debts leaving Muñoz’s council to manage the town with a 600 million euro deficit.  With 100 million already clawed back from the collective black hole in the City Hall’s coffers, and with the PGOU urban plan approved 6 months ago, it looked likely that Muñoz’s course to repeated election success was assured.  Effectively so,  her party have been voted in with just one seat less, whereas the PSOE have lost 3 of their seats.  Newly formed party Opción Sampedreña took the town by surprise by winning several seats. Of Spain’s 35 million electorate, 65% turned out to vote, and the overall margin for the PP stands at 52%.