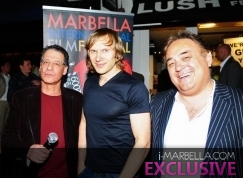 
Marbella International Film Festival, started its 2010 world tour, with a great party in London last week.In association with i-Marbella.com, The Fast and the Famous and Molton House, Mayfair.

The party attracted over 600 celebrities from the world of film and TV, in the heart of west end.
Election night in London, had an extra excitement as many guests and film enthusiasts attended the opening night of Marbella International Film festival tour of London.
More events are planned for the forthcoming weeks.
Next stop, Cannes Film Festival May 12th  , where Marbella shall be represented by a delegation from the Marbella Film Festival, promoting Marbella and all that it has to offer.

I am Brian Donald and this is my testimony. In September 18th 2017, my girlfriend Maggie called it a quit to our 6 years relationship. it was pathetic, i tried to calm her down but she insisted on breakup because she has met another nice guy in Sydney. the pain was too-much for me to bear, so i went online to look for help then i saw a blog about this powerful spell caster from USA called Dr. Ugo Wonders. i read alot of testimonies about him but i was not too sure if he could help me because i was living in Australia but i decided to give him a try. i emailed him all about my relationship problem and my fear for distance, he assured me not to worry that distance is not a barrier and that the wind blows, so shall my help locate me in 24 hours.i trusted him by his words at once and followed his instructions. Immediately after 24 hours of casting the spell as he instructed me, my girlfriend who left me to be with another man came back home to me and started begging me forgiveness. i was shocked, surprised and amazed and i was like "wow" it worked like a magic. this is the reason i decided to share this my wonderful testimony with the whole world to contact this world classified spell caster called Dr. Ugo for any relationship or breakup issues via his email generalspelltemple@gmail.com or call his mobile number +13863369876 website: http://generalspelltempleblog.wordpress.com