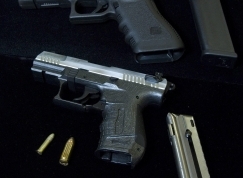 
The assailants opened fire on the middle-aged victim of foreign origin, in a street in the heart of Nueva Andalucía.  The attackers opened fire while the victim was inside a vehicle and three of the shots hit the subject's body, one of them in the head, according police sources. A moment later, the perpetrators fled the shooting.

The man was taken to Costa del Sol Hospital in Marbella in critical condition.  In the early hours of yesterday the extent of his injuries and the medical prognosis of the victim was still unclear, although first impressions were not very positive.

The incident took place around eight o'clock in the evening in Calle Pablo Picasso near to Atalaya Rio Verde. The Emergency services received the call at around 20:15 hours, the caller stated that several gunshots had been heard in the area and neighbours in the surrounding area confirmed that they had heard at least five shots.

The Emergency Service Center, 112, informed the National Police, local police and emergency services.  Upon arrival to the scene, the paramedics found that the victim had three bullet wounds, including one shot to the head. One of the neighbours first on the scene had to stem the excessive bleeding from the gunshot wounds.

The man was in critical condition although emergency services were able to stabilize his vital signs before being taken by ambulance to the Hospital Costa del Sol.  Sources at the hospital confirmed admission however were unable to confirm his state at that time.

At first inspection of the scene of the crime, the police found that several of the shots fired by the assailants had also hit the victims vehicle. This coincides with the stories of the local residents who claimed that they had heard about a half dozen shots.

The identity and origin of man, the facts of the incident nor the relationship of the attackers to the victim has yet to be established.

EraveElderram 03-02-2010 06:40 Hey Folks
Seriously considering spending some hard earned cash for a Long Island Romantic Getaways .Some objections in the gang- there are lots of cool Places to visit in Philadelphia, Pennsylvania. The family always enjoys the Places to Visit in Florida Off to start my road trip planner.

EraveElderram 02-02-2010 07:10 Fellow Tourists
Its freezing now, but in the spring, I am considering a Long Island Romantic Getaways .Some objections in the gang- I grew up near that area, so I would definitely like the Places to visit in Philadelphia, Pennsylvania. The family always enjoys the Places to Visit in Florida Off to start my road trip planner.

Trontourbbobe 16-01-2010 21:48 Hi There
Was at Mt Pinos Ski .
Anyone been there last week?
Used to be in in the midwest and ,
I liked, like Snow Creek Ski and West Virginia Snow Ski