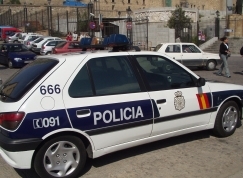 
Gibraltar authorities handed over a 25 year old man this week to the Spanish authorities after an international warrant was issued.

The British man is accused of three accounts of attempted murder from an event that took place in January of this year.  Police intervened in a fight that left one man very seriously injured and two men suffering serious stab wounds in Plaza de Los Olivos in Marbella.  A 30 centimetre machete, the weapon used in the fight, was found in a nearby garbage bin.