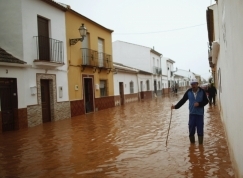 
Torrential rain has caused chaos in the south of Spain.

The number of people to die in the torrential rain in the south of Spain on Friday has risen to seven. Late in the evening the bodies of three people were found in Murcia, a 9 year old girl among them, and another two bodies were found in Almería. Another person had died earlier in Almería province, and in Málaga a woman has died, and a man is missing.


Five missing people have been found safe and sound.

8,000 people were affected by the heavy rain in Málaga province and some 450 military personal took part in the rescues in the province. A person died in Vera, Alicante, after being evacuated by a helicopter from a rooftop according to the Emergency Coordination Centre who said they don’t know if there are any more victims.

Meanwhile firemen from Murcia were looking for the occupant of a car which had been dragged by the waters of the Reguerón Canal in Sangonera la Verde. In Lorca the Town Hall ordered the evacuation several streets because of the heavy rain.

Railway traffic between Rurcai – Lorca and Ágduilas was suspended at 3.30pm for a time because of an accumulation of water.

The rush of water affected El Esparragal in Puerto Lumbreras, and the pay motorway was closed in both directions between Catagena and Vera. According to the Government Delegation in Murcia the pillars of the toll motorway, were located in a ‘rambla’ avenue which carries water when it rains.