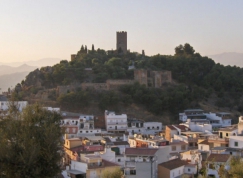 The Velez-Málaga Cultural Week is to start on Friday (April 17) with a wide variety of activities designed for all audiences.

Councillor for Culture and Heritage, Jose Antonio Fortes, explained in a press conference that the main point of attraction of 2015's cultural week would be the Book Fair, placed at the Plaza de las Carmelitas between April 20 and 25, from 10.00am to 2.00pm and between 6.00pm and 8.00pm. Apart from the usual stands, there would be one dedicated exclusively to local writers, said Mr Fortes.

Theatre will also play a role in this year's Cultural Week, with the presentation on April 18 of 'El Zoo de Cristal', at 9.00pm in the Teatro del Carmen, as well as the children's play 'El gato con botas' on Sunday (April 19) at 12.30pm and 7.30pm, at the same location.

"For music enthusiasts, there will be a performance featuring the municipal music band on Monday (April 20) and Thursday (April 23) at 11.00am, as well as the Velez-Málaga Young Interpreters Contest in the Palacio del Marques de Beniel, between April 21 and 23, from 7.00pm to 8.30pm," said Mr Fortes.

Music and poetry will be united on Thursday 23 at 8.30pm in the San Francisco Convent with a performance by the Mühlfeld Trio and poet Eloy-Garcia.

One of this year's new additions is an exhibition by press agency EFE, which will take place in the Edificio de la Azucarera (Torre del Mar) and gathers 20 photographs that display moments of the town's history.

Finally, for the youngest audiences, there will be live music, storytelling, and children's workshops in the Plaza de las Carmelitas between April 20 and 25, from 8.00pm to 9.00pm.