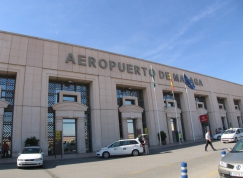 Fourteen Guardia Civil officers have been found guilty of requesting and accepting bribes from passengers carrying banned items through security at Malaga airport.

The jury heard the officers would stop passengers at the departure gates after spotting an item to be confiscated, often foodstuffs, through the x-ray. CCTV shows they then took travellers into private rooms where they received cash or other items in return for not confiscating the prohibited item.

They also often told travelers that certain items were banned when they were not and demanded bribes to let them through.

In Malaga’s longest ever jury trial, lasting one month and one day, 17 officers went on trial with three acquitted. In one case they allegedly accepted money from an Asian man to allow him to bring prohibited foodstuffs through customs that broke laws on foot and mouth disease and bird flu. One witness told the court that it was common knowledge among his friends and family in China that you could bribe the airport police with a €50 note. The court has not stated when they will be sentenced.