Have you been to El Torcal Nature Reserve Antequera Malaga? 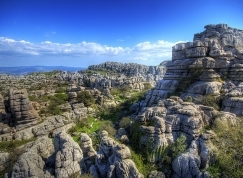 
El Torcal, Antequera, is one of the most beautifully rugged places in the world. Situated in the Sierra del Torcal mountain range, in the Andalusian province of Malaga, this national park provides a superb tourist attraction with its wonderful scenic views, its superb native flowers, and its unique, endemic wildlife.

The El Torcal, Antequera region is formed predominantly from limestone which echoes back to the Jurassic period some 150 million years ago. The mountain range raised itself from the seabed during the time known as the tertiary era, when it rose to a height of over 1300 metres. Over the ensuing centuries a series of cracks, faults and fractures were created, some of which then eroded to form the characteristic alleyways that run between the rock-faces. Further natural erosion from water and ice then attacked the boulders, creating the stunning shapes that are associated with the area today.

The El Torcal, Antequera national park is relatively small by world national park standards, covering an area of some 17 square kilometres. But what it lacks in size, it more than makes up for with its awesome and somewhat unusual beauty, with its limestone columns that look as if they are made up from individual stone slabs, that have each been meticulously shaped, and then carefully stacked upon each other. As is typical of many limestone mountain ranges, El Torcal also has some natural cave formations, like the Cueva del Toro (Cave of the Bull), of significant importance due to the Neolithic artefacts that it contains.

The national park here at El Torcal, Antequera is easily accessible by car. You can drive up to 1100 metres by car via a road accessed through the village of Villanueva de la Concepcion. You’ll find a car park as you enter the National Park where there is an information centre and a small museum with some fascinating exhibits of the local flora and fauna that can be found in the park.

There so much to see here at El Torcal, Antequera, including 30 varieties of orchid, Griffin vultures, Andalusian mountain goats, and a wealth of reptiles including ocellated and spine-foot lizards, ladder snakes, and Montpellier snakes.

There is some fantastic walking to be had here too. There are 3 trails, (you’ll find them referenced in the information centre) each of which is shown in a different colour so they are easily discernible. The longest walk is colour coded in red and covers some 4.7 kilometres, taking you up to a height of 1339 metres from where you’ll get a great view of the African coastline on the horizon. You’ll need to take some good walking shoes with you to help you negotiate the terrain, even if you take the shortest walk (colour coded yellow) which is just 1.5 kilometres long and takes about half an hour to negotiate.

If you go walking here in the El Torcal, Antequera national park, don’t forget to take plenty of water with you in the summer months. It’s a wonderful place to picnic too, but if you prefer your food prepared for, you’ll find some wonderful local restaurants and tapas bars back in Villanueva de la Concepcion. A trip to El Torcal makes for a superb family outing. If you’re in the area, don’t miss it!

Read more about what to do and see in Malaga from our GUIDE: