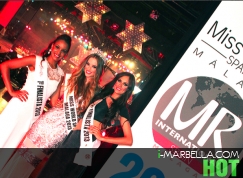 It was a gala full of fashion, beauty and music where participants performed very elegantly. The show of Miss World Spain Malaga now has a new format with a jury of professionals from the world of fashion and beauty (press, casting directors, photographers, producers, modeling agencies, stylists, makeup artists, hairdressers, etc. .). The jury stayed attentive throughout the night to make sure they make the rig decision. There were also fabulous performances by Dany Cantos and by the great soul diva and former contestant on The Voice, Yanela Brooks.

After a long deliberation he jury finally chose the winners, starting with the guys. The title of "Mr. Popularity" was the most voted by social networks, went to Emilio Victor Garate of Nerja, Top Model 2013 title went to Juan Carlos Garcia of Málaga, the winner of title for the "Second Runner" was Samuel Astorga of Cartama and the First Finalist was Alejandro Alfonso of Málaga. The most important title Mister International 2013 went to Adrian Gallardo (25), 1.89cm tall from Malaga city.

The "Miss Popularity" title among girls went to Raquel Ramos of Nerja, Paola Velasco of Velez Malaga took two titles, "Miss Top Model" and also the "Second Runner", the title of "First Runner" went to Carmen Inongo of Malaga and a beautiful woman with green eyes and long blond hair Cristina Mesa (19), 1.79cm tall was crowned Miss World Spain Malaga 2013. This gala was also a charity event to support and collaborate with the association Avoi.

Miss and Mister Malaga 2011 to be chosen this weekend (1)