Five arrested for raping a young woman at Malaga Feria 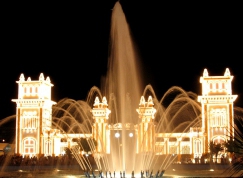 Five men between the ages of 17 and 23 were arrested at the Malaga Feria after brutally assaulting and raping a 20-year-old woman.

The girl was attacked while walking home at 7am from the Feria – where she worked at a food stand – through the Cortijo de Torres neighbourhood. The group of five men dragged her behind a closed fairground ride – called ‘El bufalo loco’ – where they assaulted her.

According to a police spokesperson, this part of the fairground had been shut down hours before, so there were very few officers left on patrol.

Police found the girl, an hour after the assault, disorientated and distressed in the adjacent neighbourhood La Estrella, where she told police what had happened.

Two men were found on the nearby Calle Paquiro, where they not only admitted their crime to the police, but also directed them to the house where the remaining three were waiting.

The five men – two of whom are minors – were transferred to the Provincial Police Station in Malaga, where they now face questioning from the National Police. The woman received medical attention from the Virgen de la Victoria hospital in Malaga.

Posters of the last 10 years of Malaga Fair

One Day at Malaga Feria