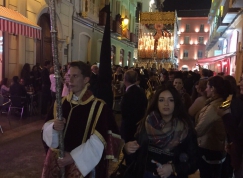 
Málaga's Holy Week celebrations were declared to be of interest to International Tourism in 1965 and they have also obtained the regional stamp of approval "Fiesta of National Interest". Thousands of visitors from across Spain and abroad come to follow the processions throughout the city's historic centre.

Málaga's Cofradías are active all year and regularly hold special meetings and masses with the aim of providing members with ongoing religious training as well as encouraging worship and acts of charity. The city has the region's oldest federation of Cofradías, which goes back to 1921.

It is possible to hire seats on the main avenue, the Alameda Principal. However, this must be arranged far in advance.

All of the local dailies in Málaga publish schedules for the Holy Week processions. These guides are in Spanish but usually have helpful timetables that are easy to decipher.

Towns and villages throughout Málaga also have processions with some villages staging passion plays as well.

Holy Week 2008 was particularly difficult for Banderas, who sorely missed his father, José Domínguez Prieto, who had recently passed away.

Banderas in Málaga for Easter