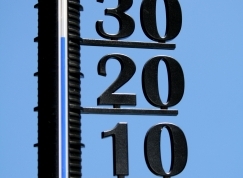 
According to the Spanish Met Office (AEMET), October 2009 in Malaga was by far the warmest since 1942. The average temperature in October was 21.4 degrees centigrade, only three degrees less than in summer.

October was also much drier than usual, despite European forecasts that indicate this autumn/winter could be wetter than normal.

The heat is not the only natural phenomenon that seems to be bucking the trends of recent years. Civil Protection have issued alert level yellow in anticipation of gale-force winds expected to hit the Costa del Sol, Valle del Guadalhorce and the Axarquia. Experts explain that these weather changes are in line with global warming predictions.