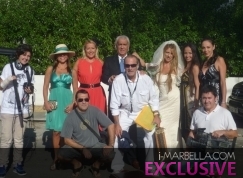 La Ambiciosa de Marbella 2 is not a movie, but a television series of three chapters, each one of an hour, written and produced by Oscar Horacio. Muriel Rens talked about the movie to i-Marbella.

1. Can you give a short plot of the movie?

The television series is about a pretty, well known, 40-something lady of Marbella who is looking for a man to marry in accordance with her life style. When she thinks to have found Mr. Right, it turns out that destiny has something else in store for her...

It is a series full of glamour, action and shows a spectacular and selective Marbella. With this series Oscar wants to show that it is possible to produce and film a television series in Marbella with only actors and crew from Marbella showing our beautiful city to the whole world.

2. Who have bought the short movie?

Oscar Horacio who is the director, writer and producer of La Ambiciosa de Marbella 2 sold the first chapter to a private tv channel in the Czech Republic as they liked the 5-minute trailer and they also expressed interest in the 2nd and 3rd chapter. Oscar already sold the short film La Ambiciosa to a distributor of short films 2 years ago.

3. When and where will it be aired?

The first chapter will be shown during a dinner at the beginning of December at a location TBA and just like the short film 2 years ago as well in a cinema in Marbella.

4. What are your plans for the future? Working on a new film already?

Right now the first chapter is being edited to be released in December. Shortly Oscar and his team will start filming the 2nd and 3rd chapters. Oscar is also liaising with distributors and producers worldwide as (private) digital tv channels need new programms to fill their schedules.

If you or a distributor you know who would be interested in representing La Ambiciosa de Marbella 2 in your country or area, please do not hesitate to contact Oscar at oscarmarbella@hotmail.com or on 655 056 751.

Business Breakfast between Marbella and Ecuador (2)