Kristina Szekely's year as the president of Rotary Club 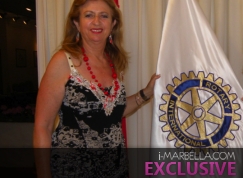 
i-Marbella took part of a Rotary Club meeting at the Puente Romano on June 15th to find out more about their work and Kristina Szekely's experience during her year as the club's president.

Rotary Clubs are numerous and famous within 168 countries worldwide. Rotary is an apolitical and non-religious club, encouraging high ethical standards and promoting worldwide peace and understanding. They enjoy social contact with like-minded, ethical professionals in all corners of the globe. The president of the Marbella Rotary Club will be replaced annually and this year the dinner will be on the 29th of June in Punte Romano.

At the beginning of their meeting on June 15th, Kristina Szekely introduced i-Marbella's guests to the members also mentioning the fact that we have an Anniversary Weekend ahead. Then the Rotary Club also discussed their events, for instance the "Cena de Gala" takes place on the 9th of July, where over 700 people are expected to attend. They also brought out the fact that there is a new Rotary Club in Malaga now.

After the meeting Kristina Szekely was kind enough to answer some questions about the club and her work. She has been the president for one year now and the new president will be appointed at the charity dinner on June 29th. Kristina says that her year as the president has been very pleasant, and she is proud of having to lead the community of the Rotarians. "The Rotary Club unites a large circle of local business people within every field, from executives to doctors and other professionals. We are all like a big family here," adds Kristina.

She says that the purpose of the Rotary Club is to help the community and do charity work. This year the Rotary Club helped people with polio (Poliomyelitis), which is a highly infectious disease that invades the nervous system, and can cause total paralysis in a matter of hours. It can strike at any age, but affects mainly children under three (over 50% of all cases). More than 10 million children will be paralyzed in the next 40 years if the world fails to eradicate polio and that is why the Rotary Club is giving their best to help out.

Besides i-Marbella's presence there was also one small special guest sitting on the table. See the gallery of the meeting below!