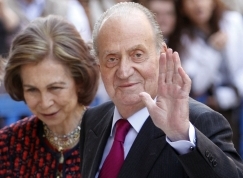 
The Monarch was rushed back to Madrid from Botswana for an operation on his broken hip on Friday night.

King Juan Carlos was taken to the USP San José Hospital in Madrid on Friday night, on the 13th of April, after returning from a private hunting trip in Botswana, Africa where he fell. His femur is reported to have been broken in three places. A statement from the palace says an emergency operation has carried out to reconstruct the fragments of the bone, and a prosthesis is in place. And Radio Nacional had reported that his operation was a success.

The surgeon of the operation was Ángel Villamor, who also operated on the King’s knee in June and Achilles tendon in September. But he is expected to remain in the hospital for four or five days. Media reports claim that King Juan Carlos was hunting elephants at the time, but this has not been confirmed or denied by the palace yet.

The Monarch appears on the web page of the safari company, Rann Safaris, who charge some 30,000 € for killing an elephant in Botswana. Meanwhile, the king's accident has become the centre of twitter comments all over in Spain. Many tweets are complaining about the King hunting in an African country, and there also are questions of the trip was paid from the public money.

King Juan Carlos says justice is the same for everyone

Help to stop abusing elephants for entertaining tourists in Thailand! (1)