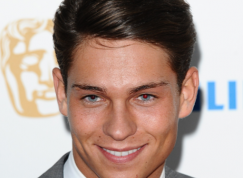 The 'Only Way Is Essex' star - who has travelled to the sun-soaked Spanish holiday destination with girlfriend Sam Faiers and a number of other pals from the ITV2 show - returned from a night out to discover the cash, his laptop, designer clothes, and prized orange Ugg boots had all been robbed.

An insider told the Daily Mirror newspaper: "Joey had been having so much fun celebrating the show's BAFTA win and was out for another night on the tiles. "But when he returned to his villa all his belongings, his cash and everything he'd brought out there had been taken. He has been consoled by his girlfriend Sam Faiers and other castmates."

However, the 20-year-old hunk - who is staying with three friends in a plush villa in the hills above the holiday hotspot - thinks he was purposefully targeted by thieves. Meanwhile, after being left with nothing but the clothes on his back, Joey's management have been forced to jet out to Marbella to provide the reality TV star with a new wardrobe.

A friend told The Sun newspaper: "Joey thinks he was targeted because they knew about him being on TV and thought he'd have a lot of valuables and money. "He had nothing left apart from the clothes he was wearing."

Hottest Pool Party of the Summer at Sala Beach with Celebs