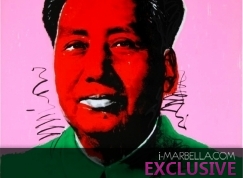 
From the 20th June until mid September the works of the man who defined pop art movement in the 20th Century are coming to Marbella!

Guarnieri Group in collaboration with Dellart and Coastfield Project will organise a unique exhibition to their clients, bringing 20 original artwork of the creator of the POP ART to Marbella. The exhibition will start on the 20th of June and it is calle d ANDY WARHOL at CARS AND ART.

If you are interested in buying these exclusive artworks, there is possibility to arrange a private viewing before and after the opening on the 20th until mid September at Guarnieri Consecionario in San Pedro. By reservation only!