Hot girl band "Sommer in the City" from Estonia is coming to Marbella! 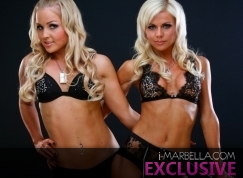 Sommer in the City


Triin and Tene Sommer are not only sisters, but they are a girl duo called "Sommer in the City". The hot girl band is coming all the way from Estonia to Marbella to perform and celebrate i-Marbella Anniversary Weekend.

Triin Sommer (25) and Tene Sommer (24) come from the summer capital of Estonia, Pärnu, and they have been singing since they were 6-years old. Before the duo project Triin was a solo artist called Trinity and released her first album in 2003 and second one in 2004. When Triin was 17, she also represented Estonia at the "Miss World 2002" contest in Nigeria. The younger sister Tene participated in 2008 at the "Hawaiian Tropic International" pageant in Las Vegas. Besides the singing and pageants, the girls have one more thing in common - they both dance and teach dancing as well.

The idea of the duo had always been in their heads and since they have the same taste in music, they decided to finally create something together. In January 2009 their dream became real as they started to perform at different events and parties. From then on the girls have been singing together. The songs vary from older songs to popular club hits. They have even posed for Estonian Playboy at the Playlist section.

"Sommer in the City" will perform at i-Marbella Glamorama Night on June 18th in club Suite, at the i-Marbella Dinner Party on June 19th in Magna Cafe and on June 20th on Puro Beach.

sarahbarbara175 08-01-2018 17:39 URGENT EFFECTIVE LOVE-SPELL TO GET YOUR EX BOYFRIEND/GIRLFRIEND BACK FAST. Unityspelltemple@gmail.com is certainly the best spell caster online, and his result is 100% guarantee.
I am Sarah Barbara from USA, after 4 years of relationship with my boyfriend,
he broke up me and brought in another Girl, i did all i could to get him back
but all proved abortive, I was really upset and i needed help, so i searched for help online and I came across a
website that suggested that Dr Unity can help get ex back fast. So, I felt I should give him a try. I contacted him and he told
me what to do and i did it then he did a (Love spell) for me.
28 hours later, my boyfriend really called me and told me that he miss me so much,
So Amazing!! So that was how he came back that same day,with lots of love and joy,and he apologized for his mistake,
and for the pain he caused me . Then from that day,
Our relationship was now stronger than how it were before, All thanks to Dr Unity. he is so powerful and i decided
to share my story on the internet that Dr.Unity real and powerful spell caster who i will always pray to live long to help his children in the time of trouble,
if you are here and you need your Ex back or your husband moved to another woman, do not cry anymore, contact this powerful spell caster now.
Here’s his contact: Email him at: Unityspelltemple@gmail.com ,
you can also call him or add him on Whats-app: +2348071622464 ,
you can also visit hiswebsite: https://unityspelltempe.blogspot.com
0