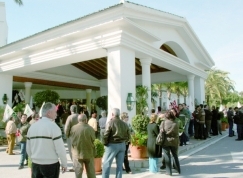 Workers protesting outside the hotel in 2009


The hotel has stood empty and vandalised since 2009

A Malaga Judge has given green light and authorised the sale of the Hotel Los Monteros in Marbella, which has been closed since 2009. The hotel which is held by the SL companies, Dajoal, Las Dunas Land and Aljoda will be sold to New Monteros S.L. and Monterotel S.L., and both companies have promised to maintain the full team of employees.


The management of Hotel Guadalmina is behind the acquisition of the Los Monteros Hotel, according to reports. The operation has been financed with foreign capital from the hotel industry.

The Los Monteros Hotel is one of Marbella's landmark hotels with guests including
Audrey Hepburn, Richard Burton, Debora Kerr and even Michael Jackson. The hotel was purchased by Russian businessman Ernest Malyshev in December 2008 and closed shortly after, filing for bankruptcy. Sources close to the owner claimed the staff had “behaved aggresively” towards hotel guests and Russian staff as well as “destroyed furniture and equipment” at the hotel. Since then the hotel has been an graffiti strewn eyesore on the main road into Marbella, and hopes are that Los Monteros can soon be restored to its former grandeur.
.