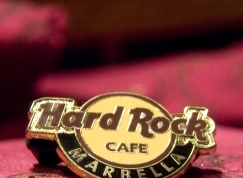 Hard Rock International held an official press conference at their stylish new Marbella location to announce the launch of the 5th Hard Rock Café in Spain.
According to the online news site Spanish News, the president of Hard Rock International explained that the group only usually launches venues in cities with several million inhabitants but, owing to Marbella’s standing as one of the Mediterranean’s most exclusive destinations, they have made the confident decision to open on the coast of southern Spain. The new venue is expected to create 70 permanent jobs and up to 100 in summer; and it’s expected that the brand’s global recognition will give the city of Marbella a strong international “promotion boost”.
The expansive venue – which is located on the prominent corner between Plaza Antonio Banderas and El Corte Inglés – is around 1000sqm in size and is receiving an impressive 2.5 million euro installation. The premises will include seating for up to 300, an atmospheric bar, open-air terrace and Rock Shop featuring Hard Rock limited edition merchandise.
In authentic Hard Rock style, memorabilia from some of the world’s most recognisable musicians will adorn the walls, as well as regular showcases by local contemporary artists.
Items of memorabilia on display for the official launch will include a red dress worn by Nelly Furtado for her music video Turn Out The Light, an autographed Aerosmith drumhead and a film celluloid from The Beatles animation Yellow Submarine.
A glamorous inauguration party will be held on 29 October and the venue will be open to the general public the following day.

The Inks at Hard Rock Cafe

Secrets of the Chef with Footballer Efren Reyero

Race for Life, PINKTOBER 2013 in Marbella