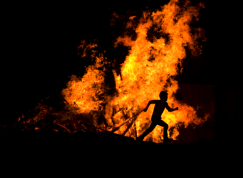 
Bonfires of Saint John (Spanish: Hogueras de San Juan, Valenciano: Fogueres de Sant Joan, Galician: Noite de San Xoán) is a popular festival celebrated around 24 June Saint John's day. San Juan is celebrated with bonfires on the beach, lasting all night through the night of the 23rd. At midnight everyone rushes into the sea to symbolise the baptisms by John the Baptist. The theory is that you wash your feet in the sea to cleanse your sins. There is also the tradition of jumping the bonfire, to burn away your sins.

The Night of San Juan is a celebration that is usually held on the beach with roaring bonfires, drink, food, and friends. It can be a memorable, almost surrealistic scene and one that needs to be experienced.

June 24th. The date remains a magical night in much of the northern hemisphere. Mythology states that strange occurrences can occur on this shortest night of the year. Certain pagan gods, for instance, make themselves visible during this night and we mere humans also give thanks and realise that the seasons of harder times are about to come. So welcome to the magical night of San Juan. San Juan is about changes. It is about night to day; it is about fire to water. Fire purifies and water recuperates, refreshes, and rejuvenates.

June 24th has the shortest night of the year, and bonfires are the theme of the night. Men and women, young people and children, all spend time to build these bonfires. According to tradition, if people jump over a bonfire three times on San Juan's night, they will be cleansed and purified, and their problems burned away.

In Andalucia, San Juan is celebrated on the night of June 23rd with some towns, such as Almuñécar, in Granada, allowing the beaches to be used as campsites for a single night. On the beaches of Malaga it's common to see people jumping over fires which, according to legend, cleanse the body and the soul. Jumping in the sea at midnight is supposed to be a way to wash away evil spirits.

It is ritual that rules at San Juan. After midnight, for example, people wash their faces and feet three times in order to be granted three wishes and for a happy twelve months thereafter. Bathing at this time is also said to be beneficial for skin complaints. Traditionally, the Spanish did not visit the beach until this day in each year. The sight of hundreds and even thousands of people wandering into the water after midnight with the haze of bonfires everywhere can be close to awe inspiring.

As well as the bonfires that burn continuously, there are also muñecos or dolls that are burnt. This is usually done around midnight. Originally, the effigies were supposed to represent Judas Iscariot but now, the religious relevance seems to have become secondary to the enjoyment factor. Quite often the dolls are made up to represent local or national personalities who are famous (or sometimes infamous). The burning of these effigies is supposed to bring good luck but quite often, it is just good fun and it makes a great spectacle. Some of the effigies can be quite elaborate.

Depending where you experience San Juan, you might find yourself almost entranced by the spectacle. In some places, hundreds upon hundreds of fires dot the coastline. The smell of smoke permeates the air and there is a feeling of camaraderie that crosses age, culture, and background.

So make sure that you reserve the night of June 23rd for La noche de San Juan. Bring plenty to drink, something to eat, carry a sweater if you are going to be near the water, and be prepared to see the sun rise on the morning of the 24th. There are always concerts, music, and other types of entertainment to keep revelers interested all night long, as if watching the beauty of the bonfires were not enough. Purify and enjoy.

The Grand Reopening of Bora Bora (7)