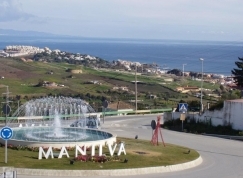 The man claimed he had cut his mother’s throat and killed her, which was not true, and was standing on the balcony of their home with two kitchen knives in his hands, threatening to kill himself.

His mother was located inside the house and told the police that her son had thrown her out of the house where they lived with his younger brother. She also said that he had taken a large amount of pills.

The firemen were called to knock down the door to the house, several Guardia Civil officers entered and managed to restrain the young man who was taken to the Costa del Sol Hospital.