Jennifer Lopez "It's my party: The live celebration" concert On August 8, 2019 Gallery Video 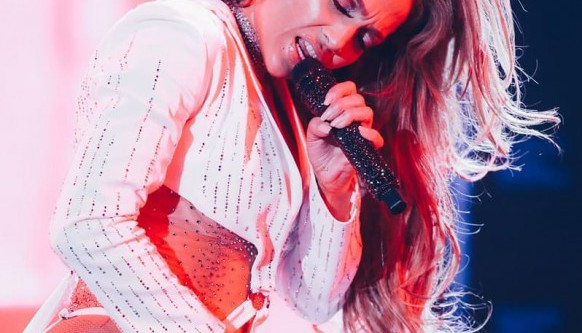 
On August 8, 2019, Jennifer Lopez conquered the Costa del Sol in Spain with her incredible concert "It's my party: The live celebration" in Fuengirola, where more than 14,000 spectators gathered at the Marenostrum Castle Park Festival, by the sea.

JLo holds this incredible tour in honor of his 50th birthday which was celebrated on July 24th and just beginning his act on the coast of Malaga the public received him singing the happy birthday.

The concert took place with the gratitude of the actress and singer in the middle, who also shared the microphone with her 11-year-old daughter Emme who from an early age is already breaking through the middle with her incredible voice.

"I will speak what I can in Spanish," JLo announced to a Spanish audience that booked up to three hours before the concert and waited impatiently for her.

"I have rules for my party! Tengo ¡reglas para esta fiesta! Singing, dancing and having a good time! ¿uando gente viene tu casa para una fiesta, tu no tienes reglas? ¡Si! ¿Como no? Yo tengo tambien!" Added the singer who offered a great interaction with the audience along the whole night between songs so iconic as her recent hit Dinero and classics such as Ain’t your Mama, El Anillo, Get Right and Jenny from the Block!

In addition to the influx of both nationals and foreigners to this incredible event of the singer who for almost 8 years was not present in Spain, were also present other celebrities, from the VIP balcony of course, as Carmen Lomana, Pepon Nieto, Esther Arroyo and Eva Gonzalez with her husband Cayetano Rivera.

"This is a very pleasant birthday. It has made me think about life. In difficult times and also in the beautiful times of my life," said JLo among songs that marked a milestone in her musical career.

For its part, the event began with a 30-minute delay while the screens announced Hustlers and World of Dance, both productions of which the actress is part.

In addition, there was some controversy as the accredited journalists were not allowed to access the event according to the rules of the office of the artist.

At the age of 50, Jlo demonstrated her reign in Latin pop with a brutal and inspiring show that never stopped its dynamic and in which the famous American actress and singer wore a total of 6 stunning costumes to the Costa del Sol.

Enjoy the gallery of the incredible concert "It's my party: The live celebration" that i-Marbella has for you.