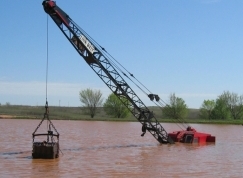 
A 76-year-old man was swept to his death by a flash flood which hit Ventas de Irun in Guipuzcoa province over the weekend, and thousands of people in towns across the province were affected by the rising waters.

Heavy rain caused the Urumea, Oria and Oiartzun rivers and dozens of streams to overflow their banks.  One of the worst affected towns was San Sebastian where dozens of people had to be rescued from their flooded homes, while 5,400 homes were left without electricity. The Basque regional government is studying the possibility of having the province declared a catastrophic zone.

More than 300 litres per square metre of rain fell in the Basque Country in 60 hours. By Monday, the rains, which had been accompanied by high winds, had lessened and moved further east to Navarre, Catalonia and the Balearic Islands.

However, weathermen have warned there will be more rainfall in the Basque Country on Thursday, followed by high winds over the weekend.