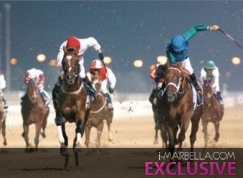 
Even the threat of rain did nothing to put off the thousands of people who attended the first race night of the summer season at the hipodromo de Mijas (horse race course). Early arrivals came to get their seat to watch Spain vs. Paraguay on the many bar and restaurant terraces. Spain scored the only goal in extra time as the horses for the first race were warming up on the track. Almost as soon as the final whistle blew and a roar boomed around the “Plaza” there was a rush to the barrier to watch the horses thunder by.

6 Races during the night, along with flamenco shows and live entertainment all around the Plaza, gave all attending great value for their 5 euro entrance ticket.

Another highlight of the evening was the “Michael Jackson Tribute Show” on stage in Le Chic, the live music Disco Bar on the VIP terrace, again great value as entry was free!

The next race meeting in on Saturday 10th July, doors open at 8.00pm