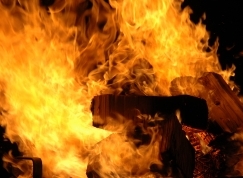 
It has now been stabilised and is believed to have been started intentionally. A Level 1 fire broke out in the Montes de Málaga at lunchtime on Friday, destroying between 75 hectares and 100 hectares before it was stabilised shortly before 7pm.

Two hundred people and 15 aircraft tackled the flames throughout the afternoon, and seven isolated cortijos were evacuated as a precaution. El Mundo said fire fighters and local police had been sent to the upper parts of the Málaga districts of La Mosca and Pinares de San Antón in case the fire spread further towards the city.

The blaze is thought to have been started intentionally. Two focal points were found in the area known as El Mirador and another near El Palo.

The paper said the column of smoke thrown up by the flames could be seen from Torremolinos.

A big fire in Benahavis made people evacuate