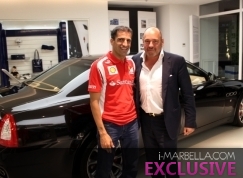 
The car dealer C de Salamanca renewed its Ferrari and Maserati facilities because of the brand's new standards.

Last night more than 200 guests witnessed the opening of the renewed Ferrari Maserati dealership in C de Salamanca. Making their way down there just for the event were Mayor Angeles Muñoz, Councillor of tourism Jose Luis Hernandez, Francesco Balli, Director of West Europe, Tito Arias, Country Manager of Spain and Portugal, Enrique Lorenzana, Director of Network Development Maserati for North and Central Europe, Jorge Hernandez, Director of Sales and After Sales for Spain and Portugal, Silvia Pini Director of Marketing and Media in Spain, Portugal and the United Kingdom, and several personalities from the Marbella´s social life, who also enjoyed the performance by Estonian singer Tene Sommer and DJ Lola Zapata.

The new showroom is spread over a total 1,500 square metres, and offers the highest levels of customer service, with a new corporate identity for Ferrari and Maserati, reflecting the passion, technical excellence and unique style of the brands. The exhibition areas, which use lighting and display technology similar to that found in photographic studios, enhances illumination, viewing angles, space and backgrounds. The personalization area  "The Touch Screen"  stimulates creativity, and offers all that is needed to support a client in choosing the many options to uniquely configure new car with a direct connection to the factory.

The F1, which Ferrari was declared world champion in 2003 with Michael Schumacher, was one of the surprises among with the arrival in the new Ferrari FF of the guest of honor, the Ferrari test driver Marc Gene, the car was brought specially from Maranello.

The Manager, José Carlos de Salamanca, among the Mayor Angeles and Francisco Balli, thanked the support received from the authorities, and participants who did not want to miss such an important event in Marbella.

C. Salamanca is the Ferrari dealer since 1995, one of the first dealerships of the brand in Spain.

Coinciding with the opening Ferrari and Maserati´s facilities, C De Salamanca will present throughout the month of July, the photographic exhibition "Maserati: there are so many stars ...", an interesting collection of images culled from the archives of the brand with clelebrities fans of Maserati brand.

VIP´s snubbed by a dull and damp Alonso (4)

The Scuderia Ferrari One by Cabestan - a timeless timepiece