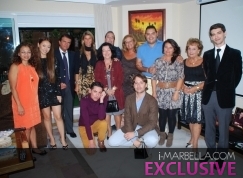 The TV presenter Felix Ramos, organised a dinner for several guests. As the first course he offered a pineapple and prawn cocktail, second was baked salmon with dill sauce, and as the dessert a cake called "Mother of God" made by actor Angel  Garo.

Among the attendees were the Consul of Panama in Mala D. Rodiles-San Miguel Baldomero and his wife Yolanda, the secretary of Panama in Malaga consular Antoine Duró, the President of the Francophone Alliance of Spain Marie-Dominique Blohorn, the Director of COPE Marbella Jose Antonio Gomez and his wife Carmen, the President of Coastfield Projects Saeko Hamada and her boyfriend Alessandro Della Morte, the comedian Angel Garo, presenter's friends, Conchita Ruiz and Alicia Huerga, and one friend of Felix named Quique Ruiz, who came from Cadiz. Everybody enjoyed the dinner and the humorous touch in the end!

He will walk Niagara Falls on tightrope!

Suite Brings Fall '13 in With A Dinner Party