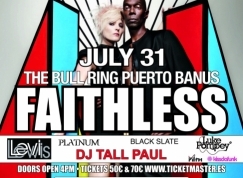 
International dance superstars Faithless will headline the L.I.V.E event at the Bullring in Puerto Banus on July 31. The concert, organized by Kings of Production, will be the first time that Faithless – Maxi Jazz, Sister Bliss and Rollo - have played in southern Spain and they will be supported at the event by British reggae pioneers Black Slate, rising British bassline trio Platnum and DJs Tall Paul and Levi Lewis.

To their millions of fans worldwide, Faithless need no introduction. When they emerged in the mid-1990s, the idea that a dance music act could produce rich full-length albums rather than one-off tracks, pack out live concerts, and bring together all kinds of genres and music fans, seemed quite revolutionary. Fourteen years, several albums and numerous global tours, festivals and hits later, those Faithless quali ties have become benchmarks of the 21st-century music scene. Their sixth studio album The Dance, which is released in May, reunites the central trio of Buddhist MC/poet Maxi Jazz, indomitably cool club doyenne Sister Bliss and visionary producer Rollo, and extends that Faithless energy even further – always passionate, always progressive.

“Essentially, I’ve always been trying to say the same thing: that all human beings have greatness inside of themselves,’ says Maxi. ‘People tend to think that the spiritual and the material world are two separate things – I don’t see it like that. Life is for living, and I’m trying to express something that’s relevant to someone who works five days and parties hard at the weekend. Being in Faithless, I’ve seldom seen more loyal, loving, dedicated and sweet fans – they keep me devoted, and they’re all over the world.’

Money from the event will be going to L.I.V.E. is the Malaga children’s Home “Cuidad de los Niños”, which home cares for more than 50 children in residence, aged from infants to young adults up to 18 years old.

The home provides infant, primary, secondary and special needs education for the children living in the Home as well as an outreach programme which offers basic needs of food, clothing and education to a further 100+ children from the shanty town on the outskirts of Malaga.   This year L.I.V.E aims to help other worthy children’s’ causes in need in the area.

Tickets for the event, which begins at 6pm, are priced at €50 and €70 and available from www.ticktackticket.com.